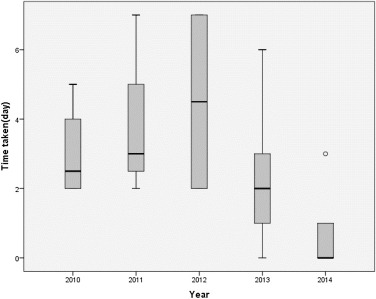 We described the surveillance through review of documents, manuals, records and interview of surveillance staff. For evaluation of the surveillance system, cross sectional study was conducted among 95 sampled Auxiliary Nurse Midwives (ANMs), 22 Block Medical Officers (BMOHs) of the District and also abstracted data from records. We developed indicators for surveillance attributes and computed proportions for the same. We computed descriptive statistics for timeliness of reporting.

Seventeen percent (n = 15) of first ANMs and six of nineteen medical officers had correct knowledge on ADD case definition. One-fourth of the ANMs reported lack of communication, training, supervision and lack of feedback in preceding six months. Median time taken to intimate district rapid response team (RRT) and to collect specimen from the date of first case reporting was the same day of reporting of index case (Range: 0–2 days vs. 0–3 days) during ADD outbreaks in 2014. Of the five reported ADD outbreaks in 2014, one was laboratory confirmed.

Knowledge regarding case definition was poor at all level of health workers. Existing supervision and feedback mechanism needs to be improved. Timeliness of reporting to district RRT and specimen collection during outbreak had improved overtime.

Communicable disease control is an important public health priority at international level to stop spread of different contagious diseases.
1
Communicable Disease Reporting Systems in the World: A Systematic Review Article.
Iran J. Public Health. 2015; 44: 1453-1465
In order to make policy for effective control of communicable diseases, every country requires effective and efficient surveillance and reporting system at all levels.
2
Group A et al. An integrated approach to communicable disease surveillance.
Weekly Epidemiol. Rec. 2011; 47: 521-540
With this demand in background integrated disease surveillance was introduced in many countries to sum up all the surveillance activities, which finally add up to the national surveillance system.
2
Group A et al. An integrated approach to communicable disease surveillance.
Weekly Epidemiol. Rec. 2011; 47: 521-540
The core activities of surveillance system are − case detection, reporting, investigation, confirmation, analysis, interpretation, action and support functions.
2
Group A et al. An integrated approach to communicable disease surveillance.
Weekly Epidemiol. Rec. 2011; 47: 521-540
As Acute diarrhoeal disease (ADD) and pneumonia are major killer diseases in under-five age group globally,
3
Children: Reducing mortality.
Fact Sheet. Media Center, World Health Organization, 2016
they are under routine surveillance in many countries.
In India, Integrated disease surveillance programme (IDSP) was launched in 2004 with the objective of strengthening the disease surveillance in the country by establishing a decentralized state bases surveillance system for epidemic prone diseases to detect the early warning signals, so that timely and effective public health actions can be initiated in response to health challenges in the country at district, state, national level.
4
Joint Implementation Review.
Integrated Disease Surveillance Project, India2009
In India, ADD contributes 13% to all deaths in children under 5 years of age and an estimated 300,000 children die each year.
5
Causes of neonatal and child mortality in India: a nationally representative mortality survey.
Lancet. 2010; 376: 1853-1860
IDSP was launched in West Bengal in the year 2007. Our analysis of ADD district surveillance data from North 24 Parganas district indicated that outbreaks of ADD increased from 4 in 2010 to 14 in 2013.
6
Descriptive epidemiology of acute diarrhoeal disease and outbreaks in North 24 Parganas district, West Bengal, 2010–2014. The Child AND Newborn.
J. West Bengal Acad. Pediatrics. 2016; 20: 6-9
However, few of the outbreaks were laboratory confirmed. Information on reasons for absence of such confirmation are not available with us. In this context, we described the ADD surveillance and evaluated the same for surveillance attributes in North 24 Parganas district.
7
Guidelines for Evaluating Surveillance Systems MMWR. vol. 37. 1988: 1-14

We evaluated the surveillance system in-terms of selected surveillance attributes like simplicity, acceptability, representativeness, timeliness of regular reporting/reporting during ADD outbreaks, positive predictive value and usefulness. It was evaluated for a reference period of January to December’2014, but specifically the timeliness of reporting during outbreaks was evaluated for 2010 to 2014. We used data abstraction form to collect data from the IDSP records.
Ninety-five of total 738 first ANMs of the district were needed to be interviewed assuming that 50% of them were having correct knowledge about acute diarrhoeal disease case definition, 10% of precision, 95% of confidence interval and accounting for 10% of nonresponse. Sample size was calculated using Epi Info Version 3.
8
OpenEpi: Open Source Epidemiologic Statistics for Public Health, Version.
2017
Random number list was generated by investigators using Epi Info to select the first ANMs for interview. Apart from that we also proposed to interview all the 22 BMOHs.

Proportions for surveillance attributes − simplicity, acceptability, representativeness, timeliness of regular reporting, positive predictive value and usefulness were computed. Regarding timeliness of reporting during outbreaks, we calculated descriptive statistics (Median, IQR) for time taken from identification of index case to intimate the district rapid response team about occurrence of the outbreak and time taken for collection of specimen. Boxplots were drawn for the same.

Approval from Institutional human ethics committee of National Institute of Epidemiology, Chennai, India was obtained. We obtained permission from the District chief health official before initiating the study. Written informed consent in local language from the study participants was obtained before administering questionnaire. We used unique identity numbers in the study tools and maintained confidentiality.

ADD is one of the 26 diseases under surveillance in IDSP in the study district (Population = 10 million). This surveillance system was established with an objective of early detection and response to disease outbreaks. Collection of data, compilation of data, analysis and interpretation, follow up action, providing feedback in the form of IDSP alerts are the different components of the surveillance activity. Three types of reporting formats are used for regular reporting. Form “S (Syndromic)” is filled by the first ANMs at health sub center (HSC) level. Form “P (Probable)” is filled at primary health center (PHC)/block primary health center (BPHC) level by the doctors. Form “L (Laboratory)” comes from the laboratories. This is a weekly reporting system. All the forms (S, P,L) reach to the district surveillance unit weekly and thereafter, district data manager uploads the reports in the IDSP portal making a copy to the state surveillance unit. Different reporting format is used during disease outbreaks as and when required. Thirteen District Hospitals/Sub divisional hospitals/State general hospitals, 22 BPHCs, 50 PHCs, 742 HSCs and only two private laboratories have taken part in this surveillance system. The weekly data is only analyzed at the district surveillance unit. According to the guideline of this surveillance system, laboratory test is only required during acute diarrhoeal outbreaks. For quick response and control of outbreaks, block medical officer and his team informs the district rapid response team as early as possible about the occurrence of outbreak and takes control measures, following which district rapid response team investigates the outbreak along with the block team.

3.2 Evaluation of acute diarrhoeal surveillance under IDSP in terms of selected attributes

This study was partially funded by ICMR - National Institute of Epidemiology, Chennai, India.

Contribution of the authors

© 2017 Published by Elsevier, a division of RELX India, Pvt. Ltd on behalf of INDIACLEN.