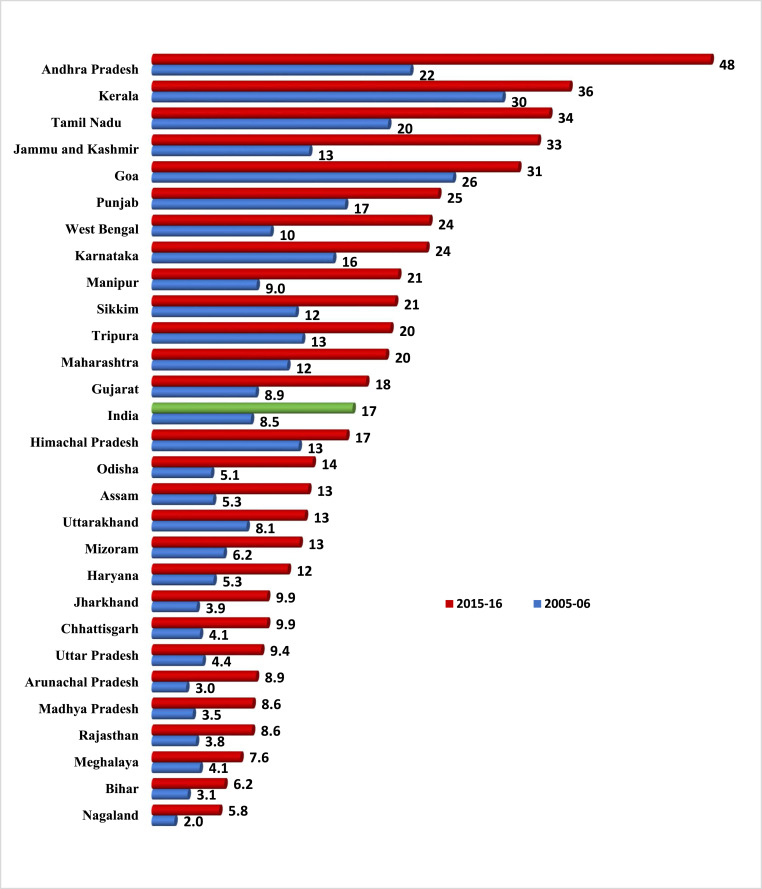 Prevalence and determinants of voluntary caesarean deliveries and socioeconomic inequalities in India: Evidence from National Family Health Survey (2015-16)
Previous ArticleCancer incidence and mortality in Poland
Next ArticleRelationship between socio-demographic, clinical factors, and quality of life in adults living with diabetic nephropathy

With a substantial increase in Institutional births in India, the prevalence of C-section section deliveries witnessed a sharp rise, with a highly skewed prevalence among births in private health facilities. The study aims to investigate the dynamics of voluntary C-section across different socio-cultural strata in India, along its major drivers.

The study used data on 249,949 live births in the five years preceding 2015-16 NFHS-4 covering 699,686 women from 601,000 households across 640 districts in the country. Bivariate and binary logistic regression analysis have been used to analyses the data. The economic inequalities in voluntary C-section have been analyzed using the poor-rich ratio and the concentration index (CI)

Seventeen percent of live births in five years preceding NFHS-4 were delivered by C-section, a sharp rise from 9% in 2005-06. C-section deliveries are common among first births (24%), in private sector health facilities (41% of deliveries), higher educated mothers and those residing in urban areas (28%). The likelihood of C-section deliveries is significantly higher among mother from high-income families. Values of the poor-rich ratio (0.092) and concentration index (0.031) has significantly revealed that voluntary C-section is more concentrated among the affluent class of households in India.

The study concludes that older women, higher educated mothers, residing in urban areas and, belonging to high socio-economic status are the ones who opt for voluntary C-section deliveries and seek private instructional delivery. The government of India should strengthen the regulatory protocol for private health facilities.

The study used the two rounds of the National Family Health Survey (NFHS) conducted during 2005–2006 (NFHS-3) and 2015–2016 (NFHS-4). NFHS is a nationally representative, large-scale, a repeated cross-sectional survey in representative samples of households throughout India. Both the surveys have been conducted under the stewardship of the Ministry of Health and Family Welfare: Government of India. The International Institute for Population Sciences, Mumbai has been designated as the nodal agency for different rounds of NFHS and ORC Macro, Calverton, Maryland, USA, currently known as the ICF International have been providing the technical support in different rounds of NFHS.
NFHS-4 (2015-16) collected information from a nationally representative sample of 601,509 households, 699,686 women age 15–49 (NFHS-4, IIPS Mumbai). Findings of this study are based on a total of 51,511 deliveries taken place for five years preceding the 2005-06 NFHS-3 and 2,59,627 deliveries taken place during five years preceding the 2015-16 NFHS-4. Details about the NFHS-4 designs, tools and protocols are presented in the national report of NFHS-4 (IIPS & ICF, 2017) and all relevant information are available in public domain on http://rchiips.org/NFHS/districtfactsheet_NFHS-4.shtml.
15
National Family Health Survey 2015-16 Report. International Institute of population Sciences and ICF, 2017
http://rchiips.org/NFHS/NFHS-4Reports/India.pdf

The finding concluded that C-section deliveries is still higher than the WHO recommendations of 5–15% threshold in C-section prevalence in India. Older women, higher educated mothers, residing in urban areas and, belonging to high socio-economic status are the ones who opt for voluntary C-section deliveries and seek instructional delivery. Women from higher socio-economic status and, wealth quintile have autonomy and can take the decision for their health care. Rising institutional deliveries may be the reason for increased cesarean deliveries in India during the last decade, as we see amplifying increment in institutional deliveries increased from 41% in 2005-06 to 79% in 2015-16. Evidence suggests that risk factors like mother's high age at birth, the size of the child at birth, women having full ANC influence the decision of women to opt for C-section. Place of delivery has come up to be the strongest predictor, influencing the cesarean section deliveries. As it can be drawn from the findings that women are voluntarily, choosing C-section deliveries are from the sample in private health facilities than in public health facilities. The analysis of socioeconomic inequalities reveals that C-section deliveries are more concentrated among the affluent class of women in all the Indian states except Kerala. Although the Union Health Ministry of India has asked states to curb “needless” Caesarean section surgeries, after a health survey pointed a sharp rise in such operations in the private sector, there is an urgent need to strengthen the regulatory protocol for private health facilities in the country by government of India. One of the regulatory protocols for all private hospitals should be displaying the name of doctors along with number of C-section deliveries conducted by them every month on their web sites as well as notice board.

All procedures performed in studies involving human participants were in accordance with the ethical standards of the institutional and/or national research committee and with the 1964 Helsinki declaration and its later amendments or comparable ethical standards. Data for this study is available in public domain, so there is no need of ethical approval for this study.

The authors of this study are thankful to DHS USAID for providing the data for this study.