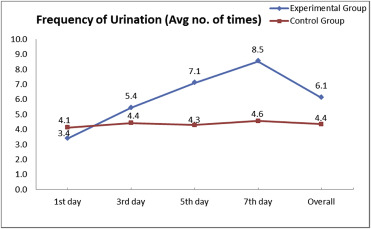 Breast feeding is the best nutrition for infants. Most of the postnatal mothers face the problem of insufficient breast milk which affects the health and well-being of an infant.

The aim of the study was to evaluate the effect of fenugreek on enhancing breast milk production and weight gain of infants in the first week of life.

There was an associate improvement in the signs of breast milk sufficiency within the fenugreek subjects when compared to the control group. The impact of fenugreek on breast milk was evident on the frequency of urination and weight gain in infants throughout their initial week of life.

The study concluded that fenugreek enhances breast milk production among postnatal mothers and facilitates birth weight of infants within the initial week of life.

An experimental design was used to accomplish the aim to evaluate whether maternal consumption of fenugreek had any effects on the breast milk production and thereby change in pattern of weight gain and frequency in urination among infants in first week of life. This study was approved by the Institutional Ethical Committee. The dose of fenugreek was determined by reviewing the previous literatures, and the approval from the Department of AYUSH (Ayurveda, Yoga & Naturopathy, Unani, Siddha and Homeopathy).
The 60 postnatal mothers who had full term delivery and met the inclusion criteria were selected for the study from the Maternity Health Center located in an urban area of Bangalore. Statistical power analysis was calculated to determine the required sample size where power = 80%, α= .05, level of confidence = 95%. Qualified participants were randomly assigned to experimental and control group, 30 mothers in each group by drawing of sequentially numbered sealed envelopes that contained a computer generated randomization code.
Inclusion criteria consisted of postnatal mothers a) of 0–1 week, b) with term healthy infants, c) with poor milk supply as reported to the health professionals d) willing to participate in the study. Exclusion criteria included Mothers with; a) documented mastitis, b) Breast engorgement c) inverted nipples, d) currently consuming any other herbals used to induce milk production, e) clinically ill, f) who had breast surgery. Infants were also assessed for poor sucking reflex.
The written consent for the study was obtained from all the participants after explaining to them about the study purpose and the procedure. Potential participants and those who met the criteria were approached individually. A code system was assigned to all the study participants to maintain the confidentiality of the data.
The demographic, obstetric and infant data were collected before the intervention. The sufficiency of breast milk was assessed among postnatal mothers using a checklist which include the number of breast feeding per day, complains of lack of breast milk and excessive cry of the newborn. The mothers in the experimental group were administered with water of 7.5 g of fenugreek soaked overnight once daily in the morning for a period of 7 days. The control group received routine care without any interventions. The number of wet diapers of the infant was noted and weights of the infants were recorded in a calibrated infantometer after changing the diaper in the morning at the fixed time. The frequency of urination and weight of the babies both in experimental and control group were compared on first, third, fifth and seventh day. Follow up forms were given to the mothers to note the frequency of urination in the coming 7 days.
The obtained data was entered into Microsoft excel and was statistically analyzed using statistical package for social sciences (SPSS) software. In this analysis, the independent variable was defined as fenugreek and dependent variables were infant weight and frequency of urination. The serial changes in frequency of urination and change in weight over the days were analyzed using ANOVA for repeated measure. Data was tested for sphericity using Mauchly's Test of sphericity. Since the Mauchly's test was significant, it indicated violation of assumption of sphericity; therefore we tend to use Greenhouse-Geisser and adjustments. The univariate approach was used to analyze within subject effects. If there was a notable interaction between the group and within subject factors (significant treatment × time interaction), the simple effect analysis of between - group factors for all time level using multivariate analysis of variance model was used. To be identified as significant, values of P ≤ 0.05 was taken.

Fenugreek, a galactagogue is useful for promoting and increasing breast milk production.
The current study demonstrates that the fenugreek was effective in breast milk production which was observed in the increase in frequency of urination and weight gain of infants during the first week of life. Oral administration of 7.5 g of fenugreek-soaked water daily does not have any observed side effects or malfunctions reported during the period of study. None of the subjects in the fenugreek group reported dislike to the taste nor discontinued the intervention.
The study suggests that the lactating mothers with complaints of insufficient milk may be advised to take fenugreek in the postnatal wards as a routine practice. However, use of fenugreek should never replace lactation evaluation and counseling for the postnatal mother. Further the Nurse lead clinics should be held at a regular basis as an integral component of antenatal and postnatal care to encourage mothers and families for right breast-feeding practices.
Breastfeeding is an important woman's issue, human rights issue, health issue and feminist issue. Breastfeeding empowers women. It provides optimum nutrition to the infant. The experience of the lactation clinic and other lactation practices that use fenugreek will motivate the research necessary to establish more scientific evidence of the herb's effectiveness in increasing milk production.

This project was supported and funded by the Rajiv Gandhi University of Health Sciences , Karnataka, Bangalore.