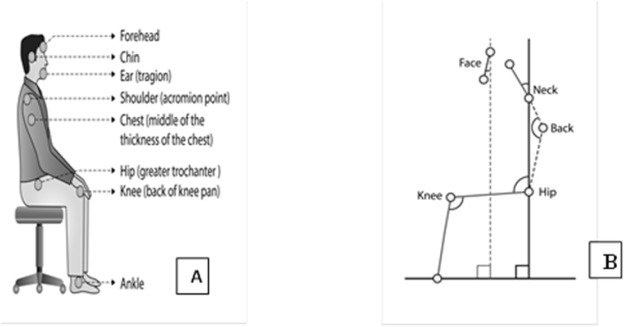 A short term evaluation of scapular upper brace on posture and its influence on cognition and behavior among adult students
Previous ArticlePoliomyelitis amidst the COVID-19 pandemic in Africa: Efforts, challenges and recommendations
Next ArticleAntenatal depression and associated factors among HIV-positive pregnant women in South Gondar zone public health facilities, northwest Ethiopia, a cross-sectional study

Inappropriate sitting posture leads to musculoskeletal problems and is reported to be linked with the individual's confidence. This study explores the importance of recommended sitting posture on student, health, and sleep.

70 volunteer adolescent students aged 18–26 years were enrolled in this study. Instructions and sensitization lectures about the study were conducted and obtained informed consent. The students were asked to wear an upper scapular brace from 8.30 a.m. to 4.30 p.m. daily/31 days and advised to maintain the optimal sitting posture as per occupational health guidelines. The effect of the upper scapular brace and optimal sitting on posture from the various body angles were measured at sitting and standing. Pittsburgh Sleep Quality Index (PSQI), Simple lifestyle indicator questionnaires (SLIQ), Happiness index (HI) responses was collected and analysed. Measured multitasking tests and anthropometric variables like Height, Weight, and BMI before and after the intervention and effect sizes (Cohen's d) was calculated. Used an alpha level (P < 0.05) to define statistical significance.

Significant differences (trivial or minor effect) were observed on PQSI, Height, BMI, back, hip, and knee angles only on sitting position following an intervention.

The findings of this study propose that wearing an upper scapular brace may assist in maintaining the optimal posture by influencing the back, hip, and knee angle and improves the quality of sleep. However, no significant difference among cognition and other measured indexes was observed.

It is well established that poor body posture leads to musculoskeletal problems.
1
Effect of sitting posture on spine joint angles and forces.
in: Proceedings of the 6th International Conference on Rehabilitation Engineering & Assistive Technology. 1–4. 2012
Poor posture, even during sleep, impacts the quality of life and sleep. Recent studies show that posture has an impact on an individual's confidence.
2
Body posture effects on self-evaluation: a self-validation approach.
Eur J Soc Psychol. 2009; 39: 1053-1064
Among the general population, students are at higher risk of poor posture with sedentary lifestyles and poor posture, especially in courses with higher academic demands. The majority of their days were spent in sitting posture. Prolonged sitting with poor posture among students, sedentary adults, or professionals, may affect their cognitive ability
3
Does breaking up prolonged sitting improve cognitive functions in sedentary adults? A mapping review and hypothesis formulation on the potential physiological mechanisms.
BMC Muscoskel Disord. 2021; 22: 1-16
and sleep quality due to poor posture that causes muscle imbalances, tension, fatigue, and eventually leads to musculoskeletal pain during sleep or daytime. An association between upright posture and mobility with different cognitive processes and underlying neural mechanisms remains unclear.
4
Mobility and upright posture are associated with different aspects of cognition in older adults.
Front Aging Neurosci. 2016; 8: 257
However, only a few studies have dealt with the relationship between cognition and body posture concerning to students. This study aims to evaluate the recommended sitting posture and proper posture maintenance with the help of the scapular upper brace influences on cognition, behavior, body alignment, and quality of sleep in the student population.
Posture is the position assumed by the body in both static positions (static posture) and movement (dynamic posture). Humans were designed to be upright, and our bodily functions are best when we are in that position. However, due to the extensive usage of automation, technology, and electronic gadgets, the time spent was more than 8 h per day in sitting.
5
Physical activity of Canadian adults: accelerometer results from the 2007 to 2009 Canadian Health Measures Survey.
Health Rep. 2011; 22: 7
Reports show that the pressures within the intervertebral disc were nearly twice as high during the unusual sitting posture as they were during the standing posture
6
New in vivo measurements of pressures in the intervertebral disc in daily life.
Spine. 1999; 24: 755-762
Further, sitting in an awkward posture for a prolonged time causes spinal or musculoskeletal disease; cervicothoracic joint and lumbosacral joints.
1
Effect of sitting posture on spine joint angles and forces.
in: Proceedings of the 6th International Conference on Rehabilitation Engineering & Assistive Technology. 1–4. 2012
However, studies and reports on the effects of proper posture maintenance during sitting and walking on overall behavior and psychological health remain unproven or not adequately focused and result in a lack of scientific evidence. Studies on prolonged unusual sitting posture may be associated with chronic diseases
7
Sitting-time, physical activity, and depressive symptoms in mid-aged women.
Am J Prev Med. 2013; 45: 276-281
and severely impact on psychological health and cognition, leading to anxiety and depression. In addition to the time spent sitting in common sedentary behaviors such as smartphones, TV, video games, digital toys, office work, internet, sitting in automobiles, transportation, and communications, improper sitting during these instances may have a high degree of harm on developmental health, well-being, and behavior.
8
Prospective associations between early childhood television exposure and academic, psychosocial, and physical well-being by middle childhood.
Arch Pediatr Adolesc Med. 2010; 164: 425-431
The improper seating/slouching at the desk in classrooms, lecture halls, libraries, and at home for hours at a time restricts the students, children, and adolescents' adequate physical movements. It forces them to adapt their postural adjustments, including the micro and macro motions. If incorrect postures persist over time, it becomes a habit at an early age. Individuals and students maintaining those incorrect postures may adapt and consider them comfortable, leading to fatigue and deformation
9
Musculoskeletal problems in VDT work: a review.
Ergonomics. 1994; 37: 1623-1648
in the near or later stages of life. This study focuses more on explaining the importance of the recommended sitting posture on health and related parameters in adult students' behaviour and health.

The present interventional study was carried out in the Department of Physiology, AIIMS, Mangalagiri, Andhra Pradesh, India. The study was initiated after the Institutional Ethical Committee (AIIMS/MG/IEC/2021-22/101) approval. The study protocol was explained in detail to the participating students of AIIMS Mangalagiri, India, and informed written consent was obtained. Only students volunteer of the age group of 18–26 years of both gender were allowed to enroll in this study. Before the study initiation, the medical history and medical examination were carried out, and students were selected based on inclusion and exclusion criteria. Following the screening, only 70 students have met the criteria. Following post-intervention, three students withdrew from the study, and only the data from 67 students comprising 34 male and 33 female data were utilized for further analysis of the study.

3. Schematic layout of this study

Intervention: The selected participants, based on the criteria were sensitized, demonstrated, and instructed to wear posture upper back brace (given individually) along with proper sitting posture guidelines to follow as per recommendations from Canadian Centre for Occupational Health and Safety Guidelines
10

throughout for 31 days (from 8.30 a.m. to 4.30 p.m.). We emphasized the study participants maintain the correct posture wherever they tend or want to sit, even at their home and hostel during the non-wearing time.
Variables measured: The Height was measured using a wall-mounted stadiometer (VM Electronics Hardware Ltd) accurate to the nearest 0.1 cm and Weight using the digital weighing machine (Charter Electronic Co. Ltd. Taichung, Taiwan 2013) accurate to the nearest 0.1 kg. BMI was calculated using BMI = weight (kg)/height (m2).
Pittsburgh sleeps quality index (PSQI) for quality of sleep with Cronbach's alpha value of 0.83, lifestyle and health questionnaires alpha value of 0.82
11
Testing the simple lifestyle indicator questionnaire: initial psychometric study.
Can Fam Physician. 2008; 54: 76-77
for behaviour were used to analyze the effect of posture intervention. Online PsyToolkit
12
PsyToolkit: a software package for programming psychological experiments using Linux.
Behav Res Methods. 2010; 42: 1096-1104
,
13
PsyToolkit: a novel web-based method for running online questionnaires and reaction-time experiments.
Teach Psychol. 2017; 44: 24-31
was used to assess the happiness index
14
The Oxford Happiness Questionnaire: a compact scale for the measurement of psychological well-being.
Pers Indiv Differ. 2002; 33: 1073-1082
and cognition (Multitasking test).
15
Are women better than men at multi-tasking?.
BMC Psychol. 2013; 1: 1-10
The various body angles measurement could give us details about the joint's compensation/alignment based on the principle of photogrammetry from the photographs using the mobile-based app (Posture corrector). The participant's pictures (lateral and frontal view) were taken in their natural posture while sitting and standing. Three persons were asked to take the same person's picture using the mobiles of the same app after the instruction of how to take the picture. However, they were blinded about the objective of the study. The height of the mobile camera was adjusted based on the subject's height using the mobile stand. Various angles mentioned above were calculated from the participant picture at the level of (Face, neck, back, hip and knee angle). It was carried out similarly after the intervention as well and compared. Before the analysis, the angles measurement and pictures taken were supervised, cross-checked, and confirmed by fellow investigators.
The various body angles that could give us details about the joint's compensation/alignment after the intervention were measured based on the principle of photogrammetry from the photographs. The measured body angles as defined by the various kinetic points was given below (Fig. 1: A and B).
The sample size was calculated based on the previous similar study with less duration and students number. Expecting 20% improvement in sleep quality with 5% alpha error, 80% power and 10% lost to follow for two side hypothesis testing the sample size was calculated to 70 using n-Master software 2.0.
Statistical Analysis: Paired student t-test to assess the mean difference between the baseline and post-intervention variables. The magnitude of the significant changes before and after the interventions were analysed using Cohen's effect sizes small effect (d = 0.2), medium effect (d = 0.5), and large effect (d = 0.8). The data distribution was assessed using the Kolmogorov-Smirnov test. All the data were analysed using SPSS software version 20.0 (SPSS Inc., Chicago, USA). Statistical significance between the groups was determined by paired Student t-test, and the significance level was fixed at p < 0.05.

The sample size of the present study is only moderate, and the study was not assessed the sleep quality parameters when recruiting the volunteers. Since it is a single-arm intervention study, no control group was added separately. After the recruitment, it was noticed that the average participants BMI mean (23.97 ± 4.24) was found to be above the regular participants; their waist or abdominal fat level influence on posture was not included in this study. The postural instability in obese individuals with increased lordosis due to abdominal fat and poor integration may affect the intervention outcomes by causing discomfort to the wearable braces. Finally, the COVID-19 lockdown then and there further complicated the data collection and follow-up of the study.

31-days of postural maintenance (assistance using upper scapular brace) and appropriate sitting posture irrespective of the type of chair among the sedentary participants may support the optimal posture by influencing the body angles at back, hip, knee level and sleep quality. No marked changes were observed on cognition. The observed changes was trivial or minor following the short-term intervention, however provides an insight for future research and explains the importance of posture maintenance, especially for the individuals confined to the sitting position over a long period of time.

We are very grateful for the funding provided by the Indian Council of Medical Research (ICMR) under the Short Term Studentship (STS) Project to conduct this study [Reference ID: 2020-00641 ]. This article also would like to extend the sincere thanks to the Department of Physiology, AIIMS Mangalagiri, Andhrapradesh, India, and volunteers for participation and providing the necessary support.

© 2022 The Authors. Published by Elsevier B.V. on behalf of INDIACLEN.