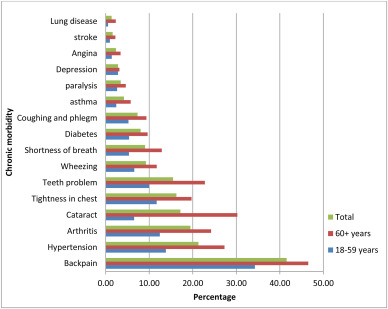 Prevalence, pattern, and correlates of multimorbidity among adult and old aged women in India

Prevalence, pattern, and correlates of multimorbidity among adult and old aged women in India
Previous ArticleThe prevalence of COVID vaccine acceptance among pregnant women: A systematic review and meta-analysis
Next ArticleWhat support is needed prior to the designation as baby-friendly hospital?

The health outcome of women is generally poor in India. Women are suffering from various chronic illness. So, this study seeks to assess the prevalence, pattern and correlates of multimorbidity among adult and old aged women in India.

The study used data from the second wave of the Study on Global AGEing and adult health (SAGE), conducted in 2015. The study employed cross-tabulation, Pearson’s chi-square test, and multivariate logistic regression analyses to assess the prevalence and correlates of multimorbidity among adult and old aged women in India.

The study suggests that the concern of multimorbidity among women in India should be prioritized with an integrated co-management approach in all diseases-specific programs to reduce and prevent the health burden in the country.

Women in developing countries lack access to basic healthcare and suffer with serious life-debilitating illness and life-threatening health issues.
1
An introduction to global women's health.
Rev Obstet Gynecol. 2008; 1: 33-37
https://www.ncbi.nlm.nih.gov/pmc/articles/PMC2492587/pdf/RIOG01001_0033.pdf
Similarly, in India, girls and women are generally disadvantaged in every aspect, including social, cultural, economic, and educational settings.
2
Gender discrimination and empowerment of women in India: a view.
Indian J Polit Sci. 2013; 74: 27-38
https://www.jstor.org/stable/24701025?seq=1#metadata_info_tab_contents
Women tend to experience inequity and discrimination throughout their lives, from childhood to old age in food intake, nutrition, education, access to a resource and health care, and other opportunities.
3
Gender differences in nutritional status among under five children in rural areas of Bijapur district, Karnataka, India -.
Int. J. Commun. Med. Public. Health. 2015; : 506-509
This condition synergistically contributes to higher susceptibility to disease and poor physical and mental health across the life span.
4
Gender bias among children in India in their diet and immunisation against disease.
Soc Sci Med. 2004; 58: 1719-1731https://doi.org/10.1016/S0277-9536(03)00342-3
Large-scale and regional studies revealed that adult women in India experienced more problems than men, such as chronic respiratory disease, asthma, interstitial lung disease, and pulmonary sarcoidosis, non-communicable diseases and depressive disorders.
5
India State-Level Disease Burden Initiative CRD Collaborators
The burden of chronic respiratory diseases and their heterogeneity across the states of India: the Global Burden of Disease Study 1990-2016.
Lancet Global Health. 2018; 6: e1363-e1374https://doi.org/10.1016/S2214-109X(18)30409-1
,
6
Gender disparities in the burden of non-communicable diseases in India: evidence from the cross-sectional study.
Clinical Epidemiology and Global Health. 2020; : 544-549
https://www.sciencedirect.com/science/article/abs/pii/S2213398419304191?via%3Dihub
,
7
India State-Level Disease Burden Initiative Mental Disorders Collaborators
The burden of mental disorders across the states of India: the Global Burden of Disease Study 1990-2017.
Lancet Psychiatr. 2020; 7: 148-161https://doi.org/10.1016/S2215-0366(19)30475-4
Arokiasamy et al. (2015) work on global aging and adult health for six countries (China, Ghana, India, Mexico, Russian Federation, and South Africa) highlighted that the prevalence rate of multimorbidity was 5% more among the women (24.8%) than the prevalence of men (19.00%).
8
The impact of multimorbidity on adult physical and mental health in low- and middle-income countries: what does the study on global ageing and adult health (SAGE) reveal?.
BMC Med. 2015; 13: 178https://doi.org/10.1186/s12916-015-0402-8
Likewise, Kshatri et al. (2020) found that the prevalence of multimorbidity is relatively higher in females (50.4%) than males(47.4%).
9
Prevalence and patterns of multimorbidity among rural elderly: findings of the AHSETS study.
Front Public Health. 2000; 8582663https://doi.org/10.3389/fpubh.2020.582663
Thus, it is a matter of public health concern because multimorbidty may maximize the susceptibility of adverse impact on health outcomes and lower quality of life of women.
10
Recent patterns of multimorbidity among older adults in high-income countries.
Popul Health Manag. 2019; 22: 127-137https://doi.org/10.1089/pop.2018.0069
Indeed, it can add the over-consumption of medicine, complexity to disease management, burden of health care services, repetitive hospitalization, which may eventually increase the health expenditure of a country.
11
Multimorbidity and its associated factors among adults aged 50 and over: a cross-sectional study in 17 European countries.
PLoS One. 2021; 16e0246623https://doi.org/10.1371/journal.pone.0246623
,
12
Collaborative care for patients with depression and chronic illnesses.
The New England journal of medicine, 2010. 2010; 363: 2611-2620https://doi.org/10.1056/NEJMoa1003955
This multiple disease burden could be attributed to various reasons like women's biological characteristics, demographic, socio-economic, and behavioural factors.
13
Multimorbidity in a cohort of middle-aged women: risk factors and disease clustering.
Maturitas 2020. 2020; 137: 45-49https://doi.org/10.1016/j.maturitas.2020.04.016
To the best of our knowledge, most studies on multimorbidity in India and other countries were carried out on particular age groups, such as young middle-aged, older age group, women in reproductive age and overall age group.
13
Multimorbidity in a cohort of middle-aged women: risk factors and disease clustering.
Maturitas 2020. 2020; 137: 45-49https://doi.org/10.1016/j.maturitas.2020.04.016
,
14
Pattern and severity of multimorbidity among patients attending primary care settings in Odisha, India.
PLoS One. 2017; 12e0183966https://doi.org/10.1371/journal.pone.0183966
,
15
Prevalence and patterns of multi-morbidity in the productive age group of 30-69 years: a cross-sectional study in Pathanamthitta District, Kerala.
Wellcome Open Res. 2020; 15 (PMID: 33215050; PMCID: PMC7658726): 233https://doi.org/10.12688/wellcomeopenres.16326.2
,
16
Interplay of multimorbidity and polypharmacy on a community dwelling frail elderly cohort in the peri-urban slums of Delhi, India.
J Fam Med Prim Care. 2020; 9: 1647-1655https://doi.org/10.4103/jfmpc.jfmpc_945_19
,
17
Burden and determinants of multimorbidity among women in reproductive age group: a cross-sectional study based in India.
Wellcome Open Research. 2021; 5: 275https://doi.org/10.12688/wellcomeopenres.16398.2
,
18
Persistence of multimorbidity among women aged 15-49 Years in India: an analysis of prevalence, patterns and correlation.
Int J Publ Health. 2021; 66 (10.3389/ijph.2021.601591)601591https://doi.org/10.1370/afm.1843
,
19
Prevalence and pattern of multimorbidity among adults in a primary care rural setting.
Clinical Epidemiology and Global Health. 2020; 8: 482-485
Despite those research, the gender-based study on multimorbidity using large-scale data focusing on both adult and older women altogether is very limited in the Indian context and other countries. Against this backdrop, the study seeks to assess the prevalence and correlates of multimorbidity across women's adult and old age groups in India. Understanding the prevalence, pattern, and disease combination of multimorbidity can be helpful in the formulation and implementation of appropriate programs such as prevention, diagnosis, and treatment for women in India.

This study is based on the secondary data collected from the second wave of the Study on Global AGEing and adult health (SAGE). A nationally representative survey was conducted among adults in six countries: China, Ghana, India, Mexico, the Russian Federation, and South Africa. The survey was carried out in India across six states; Assam, Karnataka, Maharashtra, Rajasthan, Uttar Pradesh, and West Bengal. The SAGE (Wave-1) was initiated by the World Health Organization (WHO) in 2007, and its consecutive wave-2 was conducted in 2015. This longitudinal study aims to obtain a nationally representative sample of respondents aged 50+ years, with a comparatively smaller cohort of the adult population aged 18–49 years for comparison. The survey adopted multi-stage stratified cluster sampling. For the analysis, both households and individual weights were estimated based on six states, age groups, and sex. A detailed description of the sample design and the survey procedure is provided in the SAGE (Wave 2), India national report.
20
Study on Global AGEing and Adult Health (SAGE) Wave 2, India National Report.
International Institute for Population Sciences, Mumbai2020
SAGE was approved by the World Health Organization's Ethical Review Committee. SAGE obtained all necessary ethical approval from their respective ethical review board before the collection of data. Ethical clearance was received by SAGE's partner organisations in each country through their respective institutional review bodies.
The SAGE Wave-2 covered a total of 9116 adult population in India. Out of the total respondents, 4170 were male, and 4946 were female respondents. As our study focused on the women respondents, we excluded the male respondents and women whose data is incomplete in data set. So, 4898 female respondents were included in the final analysis.
The primary outcome variable of this study is multimorbidity among the adult and old aged women. We define multimorbidity in this study as the presence of two or more chronic illnesses from a list of 16 diseases presented in the SAGE Wave 2 dataset. During the SAGE Wave 2 India survey, the respondents were asked, “Have you ever been told by a doctor/health care professional that you have (name of the disease)?". The response was then categorized as Yes (1) and No (0). The current study only analyzed the women from the individual data files. To construct the variable of multimorbidity, we coded '0' if the respondent has less than “one chronic disease” and coded ‘1′ if the respondent has more than “two chronic diseases” preceding the 12 months of the survey.
We have considered socio-economic and demographic backgrounds characteristics in this study. The predictors that were considered in this analysis are age (18–34, 35–49, 50–59, 60–69, 70 years and above), marital status (never married, currently married/cohabiting, divorced/separated/widowed), level of education (no formal education/less than primary/primary/secondary/higher secondary and above), place of residence (rural/urban), caste (Scheduled Tribes-ST/Scheduled Castes-SC/Other Backward Classes-OBC/Others), religion (Hindu/Muslim/Others) of the respondents. Behavioral characteristics include alcohol consumption, physical activity, perceived loneliness, quality of life, and self-rated health.
The descriptive statistics tool investigated the distribution of socio-demographic and economic characteristics in the study sample. Several explanatory variables were employed to calculate the prevalence of multimorbidity. Pearson's chi-square test was performed to show the association between outcome and independent variables. Bivariate and multivariate logistic regression models were used to examine the socio-demographic and economic factors of multimorbidity among the women. The regression results are shown as unadjusted and adjusted odds ratio (ORs) with 95% confidence intervals (CIs), with p < 0.05 regarded statistically significant. STATA version 14.0 (StataCorp, LP, College Station, TX, USA) was used to perform the statistical analyses. The proportion of respondents with different chronic diseases was classified into respective age groups. Additionally, disease-specific prevalence and distribution of several diseases across 16 conditions were investigated.

3.1 Background characteristics of the respondents

3.3 Prevalence of multimorbidity by background characteristics

3.4 The number of chronic morbidities across age groups

3.5 Relationship between types of multimorbidity and specific disease

3.6 Factors associated with multimorbidity among women

Our study identified that the prevalence of multimorbidity and its types increased with aging. The age, education, work status, perceived loneliness, self-rated health were associated with multimorbidity. Hence, we recommend that the socio-demographic and economic factors of the women should be taken into account while developing effective and appropriate program interventions. The multimorbidity pattern differs according to age; therefore, extensive research is required on the combination of chronic diseases across different age groups of women. Furthermore, the study suggests that the concern of multimorbidity among women in India should be prioritized with an integrated co-management approach in all diseases-specific programs to reduce and prevent the health burden in the country.

This research did not receive any specific grant from funding agencies in the public, commercial or not-for-profit sectors.

The authors declare that they have no competing interests.

The authors cordially acknowledge Dr. K.S. James the Director & Sr. Professor of International Institute for Population Sciences (IIPS) for providing us the SAGE WAVE-2 dataset for conducting the study.

© 2022 Published by Elsevier B.V. on behalf of INDIACLEN.